How to play guide for Pirates and Traders

This page will serve as a basic how to play guide for Pirates and Traders. While there is very little information available at this time, we urge you to check back often, as new information is being added all the time! Feel free to edit this guide with any tips, tricks, and suggestions.

Welcome to "Pirates and Traders". "Pirates and Traders" is a role-playing adventure in which you sail the Carribean sea during the golden age of piracy. Your object is to amass a personal fortune and retire from life at sea, but how you do so is entirely up to you. You can sail from port to port, trading goods and build your fortune peacefully. Or you can turn pirate and rob, pillage, and burn. The choice is up to you.

Before you start, however, you need to create your pirate. If you would like to jump directly to the action, press the "Quick Start" button. This will build you a good default pirate straight away. Otherwise, read on below.

This is the name of your pirate as it is used in the game. The expected format in the game is firstname surname; if more than two names are used, everything after the first name will be treated as a surname.

Your pirate will always start the game at age 20. As your character grows older, he will initially gain skills, until he reaches a certain age, after which your aptitude and skills may deteriorate.

This represents the gender of your pirate. The choice of gender may be important for some story lines, but it is otherwise irrelevant. It is assumed that the player - if female - is disguised to appear as a male, as was the case for the vast majority of female pirates in history.

This is your starting nationality. You will always start the game outside one of their ports, and with a letter of marque (license to privateer) for that nation. The different nationalities are:

In the free version of the game, you may select between an Adventurer (good opportunities to build charm, cunning, and fighting skills but little sailing experience) or a Sailor (good Sailing skills). The default quick start pirate is a sailor.

This is the name of your pirate ship.

This allows you to select which ship you will start the game in. It also determines your starting gold.

You will always start the game with a half complement of crew, full cannons, and food for 5 months of sailing. The worth of your starting ship will also determine how much gold you start with. The cheaper your ship, the more gold you will begin the game with.

Here you can select your pirate flag. The flag is used in your status screen and the high score table, but otherwise has little practical effect on the game.

This setting allow you to specify when the game should save your progress. There are currently four options: every year (whenever the game year ticks over), every month, every day (effectively any time that you perform any action), or never. These options are provided for convenience; you can still manually save the game whenever you want using the save option under the MENU button.

The Fountain of Youth option allows you to void the effects of aging in the game. Your captain will never lose skill points from old age, and can thus continue playing for as long as you feel like it (if you die in a trial or get sunk, you can always go back to an earlier save game).

However, games played using the Fountain of Youth option do NOT appear in the high score list.

True Pirate is the "ironman" mode of the game. In this game mode, your progress is continually saved during play. Death or retirement - for whatever cause - is final. True Pirate mode has its own high score table.

This the main game interface of Pirates and Traders. It is where you will likely spend the most of your time in the game. 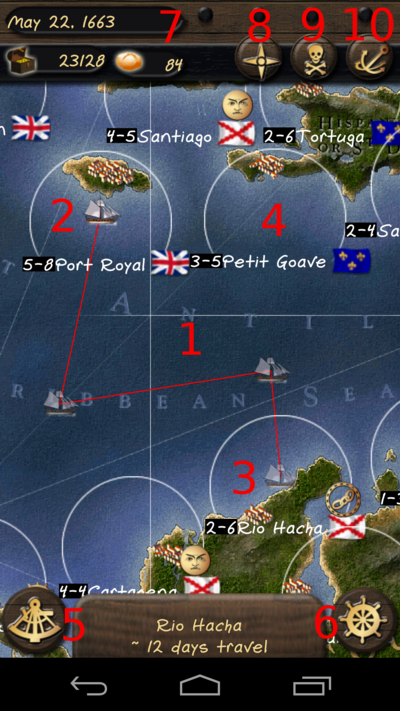 This is a depiction of the Caribbean in the 17th Century. You can scroll around the map by panning it with your finger.

This is a representation of your current ship. It indicates the current position of your ship.

This is a translucent/faded out depiction of your current ship, connected to your actual ship position by a set of red lines. It indicates the location that your ship will travel to if you move.

Touch any point on the map to make it your destination.

Information about the selected destination, including the amount of days it will - on average - take you to travel to that destination is given in the information bar at the bottom.

This is a port zone. Touching the circle will select the port zone. At the bottom of the zone you will find basic information about the zone (the two numbers are size factor and garrison number), the name of the port, and a small flag indicating the affiliation of the port zone. Small icons on the circle indicate any special events that are occurring here.

This is the search button. If you're looking for prey (or trouble), press the Search button. This will have your ship search for prey in your current location. Locating ships requires a Perception skill check and luck. Once located, good Piloting skills and a fast ship are required in order to bring your prey to battle.

Searching an area takes between 3 to 7 days of time. A pirate with high Perception will be able to search more effectively and will on average spend less time than one with low Perception.

This is the move button. To move your ship, simply touch the zone where you would like to move. If you can move to the location, the path that you will travel will be indicated on the map. Then press the Move button.
Your ship will move to the new zone unless it is interrupted by an event or encounter.

Note that you may have random encounters with other ships occurring when you sail around the map. Be careful when sailing through waters controlled by enemy nations or infested by (other) pirates.

This is the status bar. It contains information about the current date in the game, how many doubloons your ship currently holds (note that your personal wealth is separate from this), and how many days the food on your ship will last.

The menu button takes you to the game menu. This allows you to access the help files (including this site), view the game map (more useful in other game views), and save the game.

Pressing the Status button will allow you to check the status of your ship and other information about your pirate.
This is also the view where you assign new skill points to your pirate and administrate your crew.

Note that if you are carrying contraband when you enter a port, you will be intercepted by Customs officials who will demand to inspect your ship. If you do not intend to run away, you will need to either have a high Cunning skill in order to outsmart the officer or have a high Charm skill so that you can bribe him.